© 2013 — 2019 , www.combinefood.com, All rights reserved. Materials published on the web-site
is a subject of Intellectual Property of Combinefood.com/ru
and may be used with the valid link to the source only.

Articles About ambience when eating

About ambience when eating 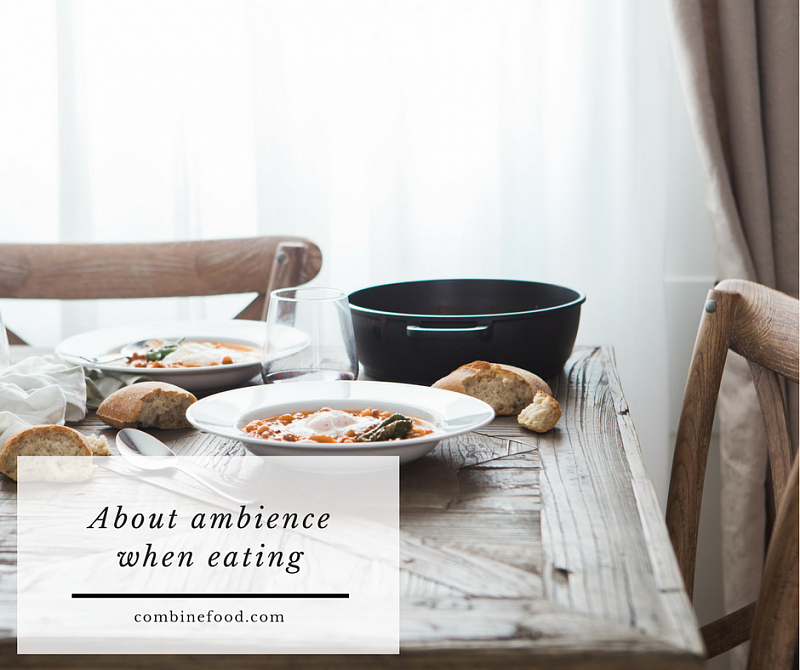 While eating, people relax and become especially sensitive to external stimuli. That is why table setting, appearance of dishes and the environment in which you are eating are so important. A shared meal is a kind of a ritual. People eating together absorb subtle vibrations of each other, and by doing so they sort of let the other person step into their inner world. That is why it is recommended to eat only with nice people. At the same time, sharing food brings people closer to one another. If another person is annoying you, it means that you have not gotten rid of pride, greed, squeamishness, arrogance or something else.

THE BENEFITS OF CHEWING

Everyone should chew for a long time. Some people say you should conduct not less than 30 masticatory movements for every piece of food, others say it should be around 80. Of course, you do not need to count, but it seems really long, especially when you are not used to it.

Every piece of food should be chewed until it becomes completely liquid, so that you tongue does not feel any heterogeneity. At the same time, the food is actively watered by saliva. If there is not enough saliva, it could mean that a person is not hungry yet, that he is already full or that the food is not very good – it is too astringent, hot, tasteless or dry.

Many people choose the easiest way and wash the food down with drinks. In general, it is allowed to drink a little while eating, but it is recommended to learn how to use only your own saliva. Moreover, liquid food such as dairy products, juices and even water also should be “chewed” by shaking every sip in your mouth. It should be done not only because enzymes contained in saliva split starches and some proteins while salivary mucins make food ready for digestion, but also because Prana is absorbed from the food in your mouth and the longer a piece or sip of food stays there, more Prana you get. Therefore, you should keep food in your mouth until its taste disappears.

By the way, almost all plant food has a special ability – it becomes only tastier in the process of chewing. People who swallow too fast do not even know how the dishes really taste.

Chewing is also extremely important physiologically. All the nutrients are split in the gastrointestinal tract only when they are in a dissolved state. Food cannot be digested in a lump. Small lumps can be softened by the gastric juice and then split by the pancreatic juice and bile, but this slows down digestive processes significantly and can lead to rotting and not efficient use of food. The efficiency of our digestive mechanism increases a lot when food comes into the stomach in a liquid state after being properly treated by saliva. In this case you can be satisfied with a smaller amount of food, as a person is alimented not by what he has eaten, but by what he could digest.

It is known that a large part of our energy is spent on digestion. These expenses can be significantly decreased by thorough chewing, as this usually leads to eating less while treating what you eat better. Digestive organs receive an opportunity to work without overloads and to rest, and as a result various diseases such as gastritis, colitis, ulcers, neurasthenia and others are healed without the need of medicines.

Bircher-Benner describes an interesting experiment conducted by professor Chittenden (according to Bircher-Binner “The fundamentals of nutrition”, 1914) from October 1902 to April 1903. Three groups of volunteers were formed: the first group had professors, second one had sanitarians and soldiers and the third one had athletic students. The main condition was to chew all the consumed food until it is swallowed unintentionally. The participants of the experiment were allowed to eat according to their own taste preferences and appetite (the harmful effect of keeping food in your mouth by force and counting masticatory movements had already been proven at the time by Fisher). There were also some lectures about traditional myths regarding the role of protein and caloric food conducted.

Very soon people decreased the caloric content of their diet for 25%, the amount of protein consumed for 40% and the amount of meat for 80% just by following their instincts (i.e. naturally, following only their own wishes).

In a month, daily consumption of protein was decreased up to 50 grams. The professors were eating 2 000 kcal per person on average, sanitarians and soldiers from 2 500 to 2 800 kcal and athletes around 3 000 kcal. By the end of the experiment these numbers were lowered even more, and one of the participants became vegetarian.

During all that time soldiers and athletes were actively training and the soldiers’ force increased two times! Meanwhile, the athletes who did not expect to improve their results improved their achievements by 15-20%.

No, it is not in vain that all the dieticians insist on thorough chewing of food, some of them even calling this principle the key one, as its meaning is very profound. Yogis put it the following way: “Hard food should be drunk and liquid food should be eaten!”