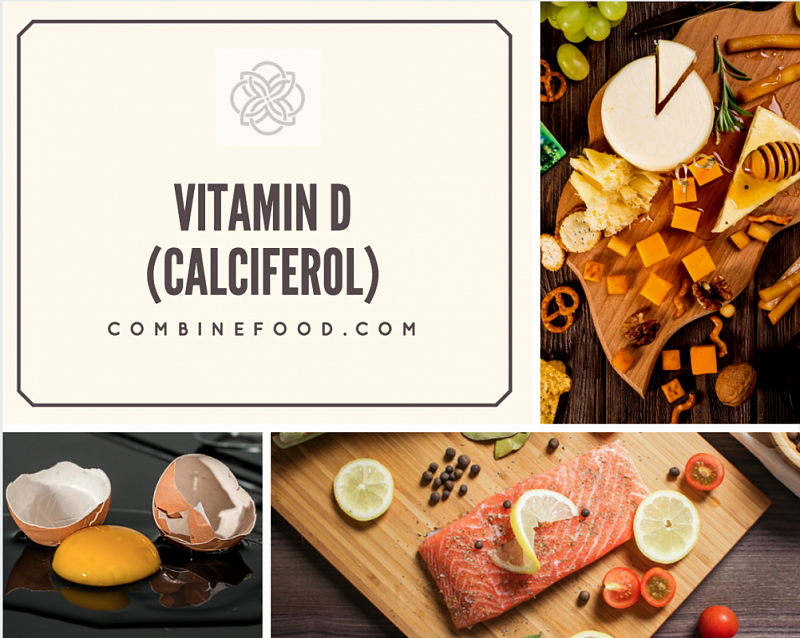 Vitamins of this group (D2, D3, D4 and D5) are mostly responsible for calcium and phosphorus metabolism, so they are directly connected to bones formation.

Calciferol deficiency (rickets) in adults can lead to high fatigability and feeling of sickness. Bone fractures also heal slower. Rickets is especially dangerous for children. Acute forms of this disease are usually encountered in children younger than three years. Among first signs of rickets are irritability, tearfulness, fatigability, bad sleep and stool problems. Appetite can decrease, the back of the head starts sweating and a child can scratch its head on a pillow. If not treated on time, in a couple of weeks skull bones become softer in the region near the fontanelle, the head size increases and the shape of a head can become squared later. Later other bones also become softer and teeth growth is disturbed. Because of the body weight, the spine and legs can bend and breast might go forward. Intestine functioning is disturbed too and rickets is often marked by abdominal flatulence.

The most effective measure to prevent your future child from having rickets is ensuring you receive enough calciferol during pregnancy. It has been calculated that taking 1 500 IU of vitamin D per day (one and a half teaspoon of medical cod liver oil or two tablespoons of natural cod liver oil or one to two drops of ergocalciferol) during last three months before giving birth lowers the frequency of rickets cases three times. However, you should keep in mind that systematic overdose of calciferol during pregnancy can cause untimely hardening and fusion of the bones in the baby’s skull. It is the same with any active compound: in small doses it can be beneficial and in big quantities it becomes poison.

Certainly, healthy mothers with good eating habits and active lifestyle do not need any additional vitaminization, especially if they live in the middle and southern latitudes. Those dedicating less attention to their health, especially those living in the northern regions, can consider taking additional vitamins as a preventive measure.

This difference between inhabitants of northern and southern regions is not random and has a reason. The issue is that calciferol contained in food is usually not active. Vitamins are activated under the effect of sun light and vitamin D3 can even be synthesized autonomously in such circumstances. Consequently, the farther you are from the sunny south, the harder it is to obtain vitamin D. For example, in Great Britain, according to the data from 1975, 74% of children and 53% of adults suffered from calciferol metabolism disorders.

On the other hand, people may also suffer from the excess of vitamin D. Very often this type of hypervitaminosis happens in children, when their mothers start randomly increasing medicine dosages. It is especially dangerous to take a lot of ergocalciferol (D2) at the same time with active sun or quartz exposure. Fish oil usually does not cause hypervitaminosis. Therefore, in the absence of acute necessity, it is not advised to take vitamin D supplements (as well as any others). When prescribed you should strictly follow the dosage determined by a doctor. Increasing the dosage, say, 3-4 times will not lead to a fast and noticeable intoxication, but gradually, if taken regularly, the concentration of calcium in blood will increase significantly. It will start depositing in different tissues, e.g. in the heart, lungs, kidneys and blood vessels. And such excess of calcium means ossification and calcification. As a result, the skeleton becomes more fragile and metabolism is disturbed.

In normal conditions an adult person needs around 100 IU of vitamin D per day, while children need 400-500 IU.