Articles What does weight depend on?

What does weight depend on? 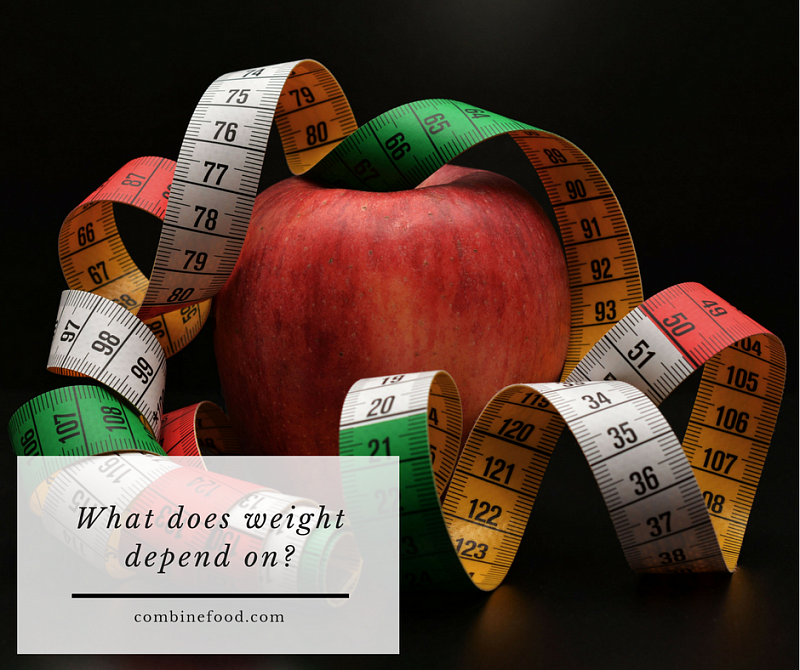 One way or another we spend all the energy we receive. It is used for maintaining body temperature, enzymes synthesis, moving and working, nervous system activity, thinking etc. The more we spend the more intensive our metabolism is and usually the better the digestion is (up to some limit).

There is an incredible equilibrium between received and spent energy, inflow and outflow. This is one more example of a general property of all living matter – self-regulation. In human organism it occurs on several levels. The supreme leader of our biological bodies is the brain. Its commands control work of all systems without any exceptions, even functioning of separate cells. This can seem fantastic, but some yogis and outstanding fakirs have evidently showed such abilities.

In normal conditions all current tasks connected to observing and controlling the organism are performed by our subconsciousness. There is also a complex hierarchy in it, but it is not very important for us. What is important is that by giving our subconsciousness a defined directive or program you can work wonders to your body.

Our subconsciousness does not only control our organism work directly, but also influences it though a complex system of hormonal self-regulation. This system consists of the main coordination center – the hypothalamus, “the middle link” – the hypophysis and internal secretion glands subject to it. The hormones secreted by them are the ones that regulate the metabolic processes directly.

It turns out that our weight depends in the first place on the inner reasons – mostly on the directives of subconsciousness and hormonal equilibrium. The latter one is influenced by the genotype, emotions and health (or diseases to put it more precisely).

American researchers have proven that the average weight of a person almost does not depend on the caloric content of food (!). Obviously, this is true only in normal conditions, when there is no forced limitation of food and a person is able to calmly satisfy his hunger. We come to a conclusion that the regulatory systems set some defined weight level. If a person overate a little, the excess of energy will just lead to metabolism intensification and will turn into heat, which will be radiated by the body for some time, until the equilibrium us restored. However, if for an extended period of time you eat more than you want on purpose, then, of course, a part of food will be used for storing more fat. However, once a person stops torturing his body, his weight will soon go back to normal. Obviously, such overloads lead to untimely outwear of inner organs.

On the contrary, in case of malnutrition the organism starts using its reserves to survive. Thermogenesis is decreased, metabolism is slowed down. Then, a person starts feeling very strong hunger (if the organism is clean). A person, of course, tries to satisfy it, and after that the reserves are restored. (Here we are talking about a casual short period of time without eating). During long-term starvation the processes are changed significantly. A sick or intoxicated organism can also behave differently. It can often use the malnutrition period to start self-cleaning processes and become involved into semi-starvation condition. In this case, it is better to help your body and start complete starvation.

Unfortunately, this regulation is not as perfect as we would like it to be. Nature does not know how lazy our life is in the conditions of abundancy. Our organism was initially set to reserve some amount of fat for “hard times” and this was conditioned by the objectives of survival. Consequently, when eating abundant, saturated food a healthy person little by little reserves some fat, but the “hard times” never come and the fat storages grow continuously…

With age the proportion between produced enzymes changes a lot and the equilibrium shifts to the side of gaining weight. V. Dilman even thinks that obesity is a normal consequence of ageing (but just until some age, after which a person starts “drying”). However, this does not mean that overweighting is inevitable. A person can always consciously shift his inner equilibrium to one or another side, but for that all regulatory systems need to function perfectly well. To achieve that one person may need to fast, while another one may need to start exercising and change his opinion about donuts and cakes. Regulation systems disorders can be considered a disease and a disease cannot be “normal”. Normally a person should be fit, strong and active and if he is fat or emaciated, then that is pathology.

By the way, while excess of weight can be encountered in healthy people not taking care of themselves (however obesity causes different diseases on its own), abnormal thinness usually signifies some hidden diseases – nervous or hormonal disorders, stomach or intestinal diseases etc.

Obesity can also often be caused by regulation disorders – innate or acquired. For example, if a child is forced to overeat since early childhood, the adoption reaction of his organism will be to form new fat cells. By doing that, parents condemn their child to being overweight. Fat cells are formed only in the first years of life, later the fat is created based on the existing cells. So if a child overeats, the amount of fat cells can increase several times comparing to the normal level.

All that was said in this part can be shortly resumed in the next statements:

1. A crucial role in maintaining weight is played not by calories, but by the self-regulatory systems. It is them that control both energy expense and the feeling of hunger. Both emaciation and obesity signify a malfunctioning of regulatory systems. Such disorders can be innate, acquired or conditioned by age (“normal”).

2. Functioning of regulatory systems depends a lot on repeated outer influence (alimentation, physical loads, emotions etc.). When one of those factors is systematically inconsistent (increasing or decreasing) the equilibrium is disturbed.

3. Only a complex approach can optimize weight and energy exchange. All factors such as psychological balance, nutrition and exercising play an important role. One can (though not always) maintain weight by just following a diet for some time, but you cannot ensure health and long life of your body if you do not live in harmony with nature.

And finally, the main conclusion of this chapter: You do not need to count calories. When your organism is ready to digest food, the lack of energy will automatically cause a feeling of hunger. The normal satisfaction of this feeling (without gluttony) is surely the most reasonable way of alimentation. However, there are different types of hunger. But we will talk about it in the second part of this book.