© 2013 — 2019 , www.combinefood.com, All rights reserved. Materials published on the web-site
is a subject of Intellectual Property of Combinefood.com/ru
and may be used with the valid link to the source only. 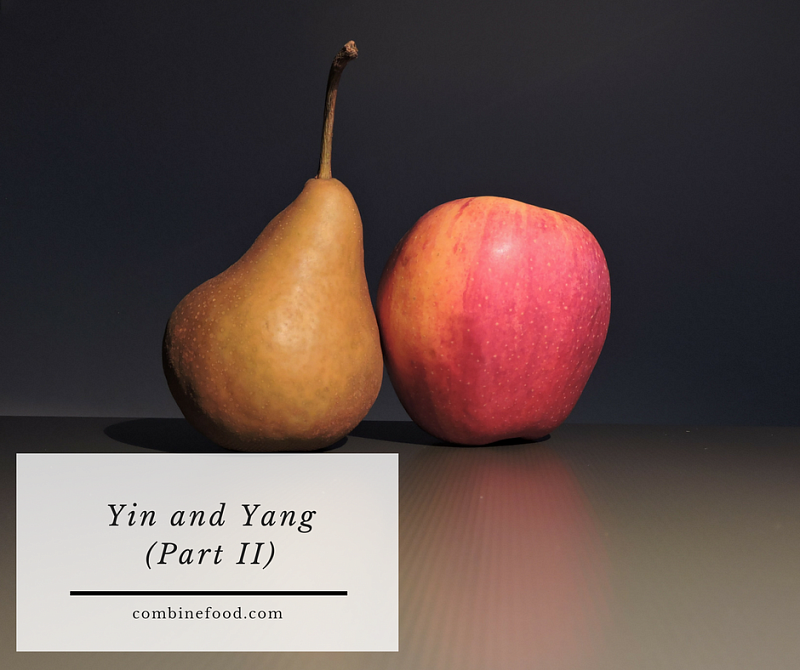 However, very few people can be purely Yin or Yang. Most people are Yin in some things and Yang in other ones. When the Yang part increases, the Yin part decreases and vice versa. Disturbance of equilibrium of Yin and Yang leads to diseases.

Some organs or parts of the body can be suffering from excess of Yang leading to corresponding diseases, while other organs can be lacking Yang, what also causes different diseases. P.P. Sokolov describes signs of excess or lack of Yin and Yang in the following way. P.P. Sokolov, Concept of time and health. Your Health, 1989, No. 3:

Voice is too loud and sonorous. Eyes are very lively and too shiny. Quick gestures. A person gets overexcited when speaking. Excessive amusement, singing, laughing. Predisposition to high temperature. Fevers, local pains, predisposition to muscle tension, spasms. Feeling of pain in different points when pressing.

As any disease is caused by increasing or decreasing of Yin or Yang (according to traditional Chinese medicine), by adding or removing the necessary amount of Yin or Yang you can cure any disease. Doctors following the principles of macrobiotics do that using usual products as the source of Yin and Yang because, as anything in this world, food can also be Yin or Yang.

Yin food cools you down, makes your body soft and passive. When there is an excess of it, it causes fatigue, sleepiness, paleness and loss of appetite. H. Aihara, one of the specialists in macrobiotics, advises not to consume more than two Yin products during the same meal, as it will be very hard for your organism to manage them. Long-time excess of Yin food leads to depression, tension and irritability.

During summer, when it is hot, it is recommended to eat more refreshing Yin food. Meanwhile, in winter it is better to consume mostly warm Yang food. In his book, called “Zen Macrobiotics”, G. Ohsawa gives the classification of products reproduced in table.

Table. Distribution of products from Yin (V) to Yang (Δ) 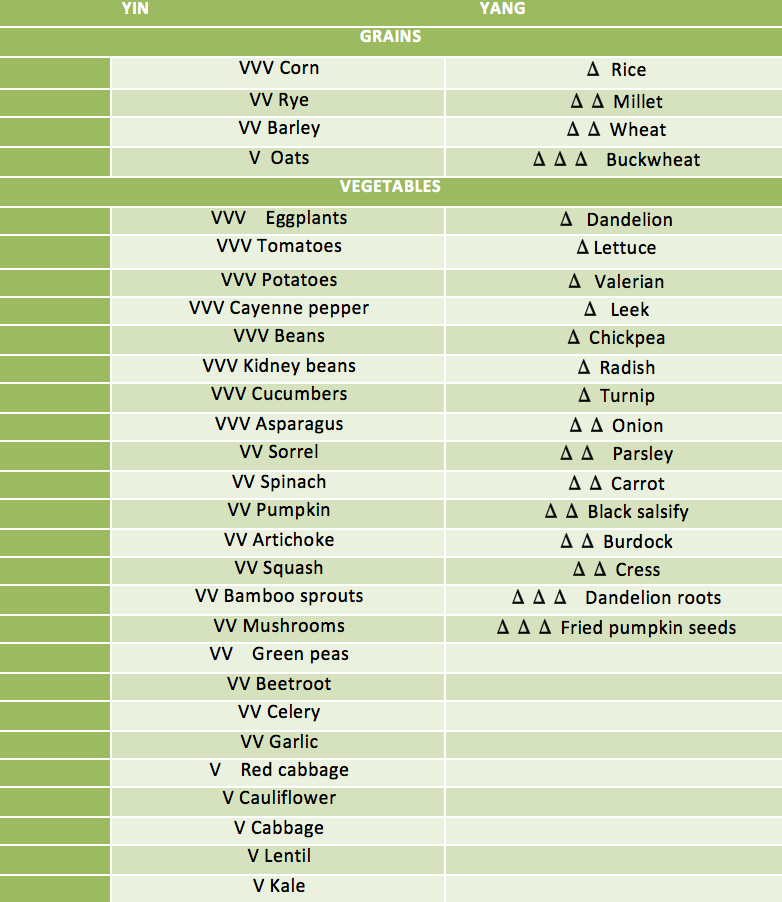 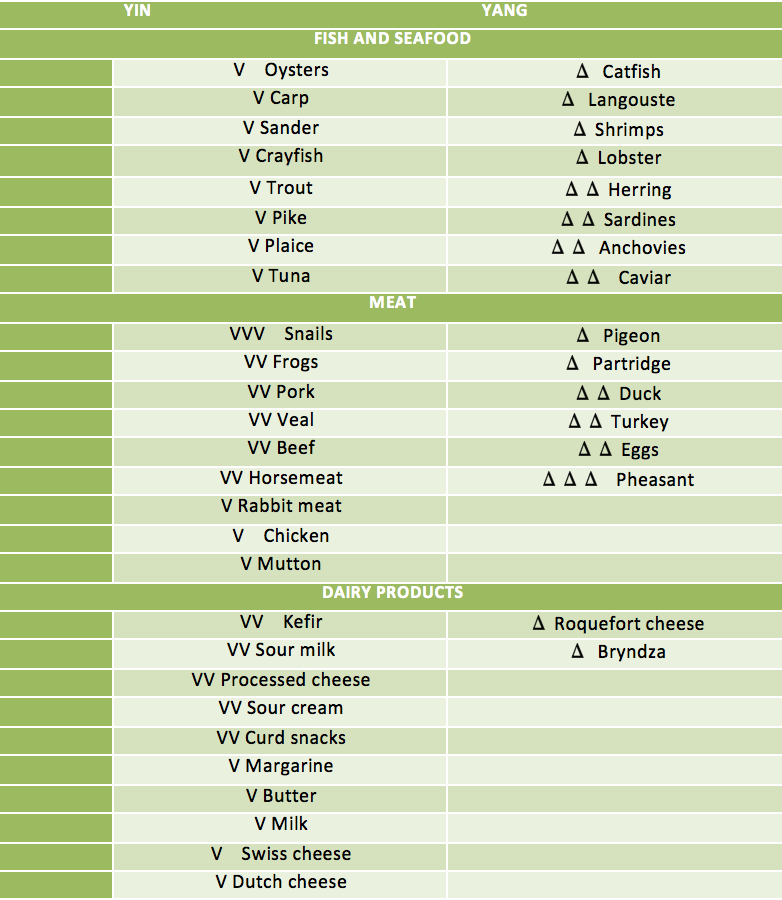 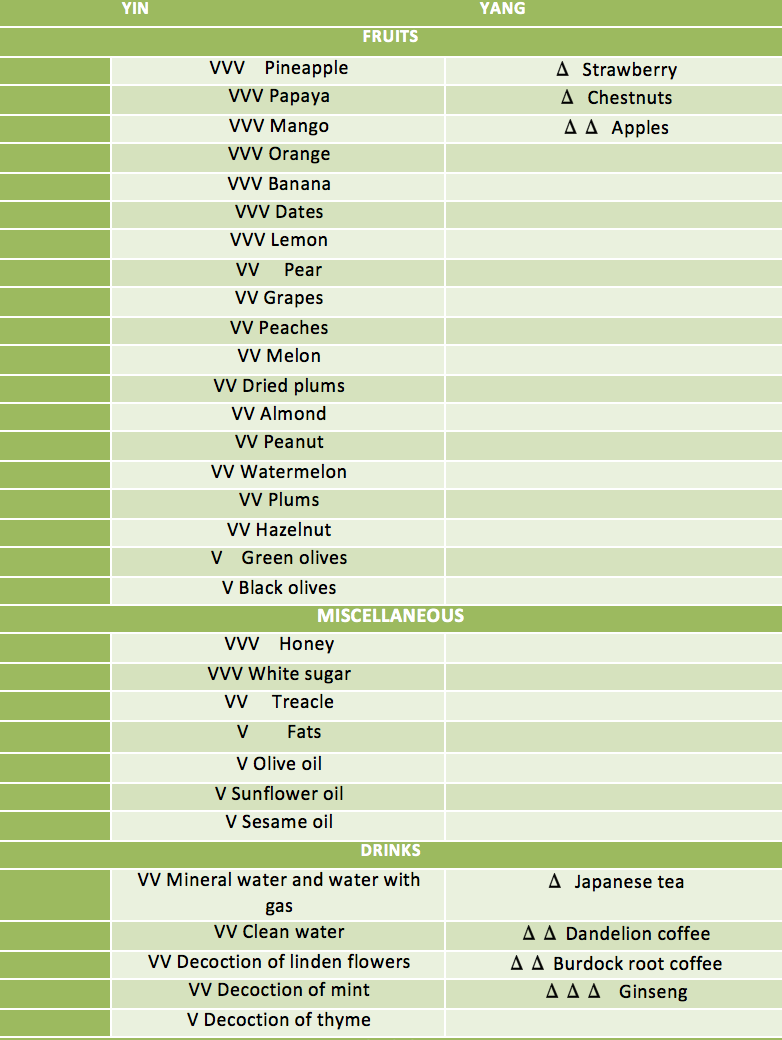 H. Aihara also gives a very clear classification of products in terms of Yin and Yang in his book “Popular Macrobiotics”. To be honest, there are some differences between the classifications of Aihara and Ohsawa. This is normal, as all people differ in their perception of the world. Moreover, the properties of products have changed in the new Yuga. In general, in our opinion, Aihara’s classification is more reliable.